An auction item at the annual Yakima Valley Zonta Club’s Murder Mystery dinner was a once-in-a-lifetime event took place on the Capitol Theatre stage during the evening of October 25, 2012 when twelve guests were seated at a beautifully decorated Halloween table to have dinner and discuss the plot and characters with author Susan La Riviere, who wrote GHOST OF THE CAPITOL THEATRE.

The fictitious ghost in the novel was a striptease dancer from Montreal who was garroted in the theatre during the showing of the movie, PSYCHO, during the mid-1960s.

After dessert was served, the house lights shuttered while a cloud of fog filled the stage and the guests could hear “Therese’ the ghost” walking across the floor above them looking for the door to go home. She momentarily appeared near the former projectionist booth then swooped on stage and danced to Larry La Riviere’s recording of THE SHADOW OF YOUR SMILE. Her perfumed ghostly presence caused the men in the group to rise from their chairs and sway with her as she floated around the guests in her tattered gown and ghoulish white face and eyes and black lips. 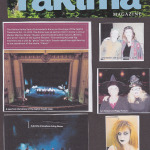 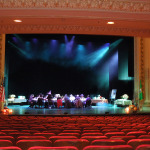 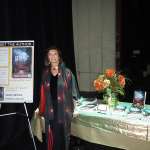 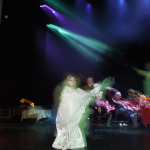 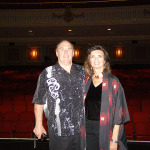